The FREYBURGER family estate has existed since the end of the 19th century. Ammerschwihr, a former fortified village, was bombed in 1944 and the house of Sebastien Freyburger completely destroyed. 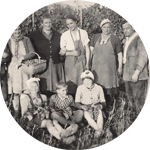 After the war, his son, also named Sebastien-Joseph, rebuilt then the estate and the cellar, behind the town hall of Ammerschwihr (old wall still visible at the entrance of the domain).
This large building, rebuilt in 1952 according to the principle of the houses of Ammerschwihr, includes a porch, very useful for access to the sheds with the agricultural equipment, and the trotthus, still still room of the press but also cellar of tasting. 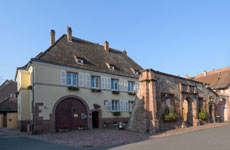 Sebastien-Joseph was a lover of the vine grafting his own plants. He was finally a man who loved contact with others, he will be one of the first to develop bottling and customers since the 1960s.

In the late 1970s, the family estate covers 7Ha which will be given to his two sons Marcel and André. It is Marcel who will continue the work of his father Sébastien and will choose to sell only in
bottles, he will give his name to the estate. He had the love of the vineyard and continued the work of his father until the installation of his son Christophe, in August 1994. 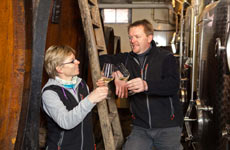 With studies of viticulture-oenology in hand and 3,5Ha, Christophe is only twenty years old when he takes over the domain. Nathalie, his wife met on the banks of the Lyccée Viticole de Rouffach, will join him a few years later, in January 2001. Since then, Christophe and Nathalie have undertaken several projects: the enlargement of the vineyard until 7.5Ha, by clearing plots in hillsides and terraces, the valorization of the bottles and since 2009, a soft conversion towards the organic farming.
Their balance: Being able to work together, as a family, in the vineyard, in a cellar, or in a salon ... Both like to taste the different facets of their profession!

Some pictures on the history of the FREYBURGER domain